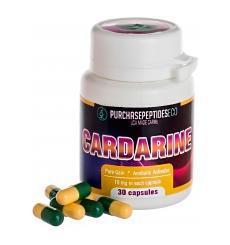 GW 501516 (Cardarine /  endurobol) is neither an anabolic steroid nor a selective androgen receptor modulator (SARM), and therefore cannot be regarded as muscle mass enhancer. However, its effect is rather different – it reduces the level of “bad” cholesterol ( LDL) in the blood, and increases “good” one ( HDL). Thus, cardarin can be regarded as protector of vascular system of the body.

It increases duration of training and reduces the period of necessary rest. This increase of endurance was the reason why this substance was banned by anti-doping agency. The drug improves absorption of glucose by muscle tissue and has pronounced fat burning effect, which makes it very popular among bodybuilders.

It also “smoothes” side effects from steroids and can be used in a Post Cycle Therapy. For instance, in combination with trenbolone, Cardarine not only enhances its effect, but also reduces such side effects as insomnia, high blood pressure and headache. Thus GW 501516 improves the training process and protects your body by reducing the risk of diabetes and cardiovascular diseases.

GW 501516(Cardarine) is usually taken at dosages of 10-15 mg ED, for 8-12 weeks. There is no benefit in further increase of the dosage as it doesn’t increase the effectiveness. You can combine it with virtually all types of steroids, fat burners and growth hormone.

Almost no side effects were found during tests with GW 501516. However, there was a report that at the dosages exceeding physiological dosage by many times it increases the risk of cancer in mice. Nevertheless this report is doubtful, since the test was conducted only once, and in other tests the drug revealed absolutely opposite results – it reduces tumours and has therapeutical potential in treatment of oncological diseases.

After all, the results of “cancer” test were purposely misinterpreted: the dosage administered to mice was extremely high – 3mg/kg (in some sources 10 mg/kg). So, if we transfer this dosage on human trial, we would get the following numbers : to get “cancerogenic” result a 90 kg person has to take  270 mg (or 900 mg) a day(!), which is ridiculous.

Cardarin or GW 501516 also has anti-inflammatory properties and takes part in the differentiation of colon epithelium, which is a natural restriction of the uncontrolled growth (colon cancer).

Be the first to review “GW 501516 (Cardarine, Endurobol)” Cancel reply