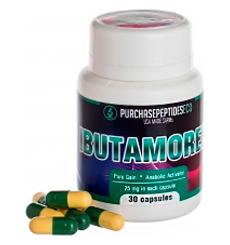 Ibutamoren MK-677 is a powerful agonist of ghrelin receptor. It means that it mimics the action of endogenous hormone ghrelin, and thus, stimulates the synthesis of growth hormone. The effect of this compound can be compared with such peptides as GHRP-6 or ipamorelin. You can buy MK-677 in the form of tablets which is very convenient for those who don’t like painful injections but still want to gain mass in a short period of time.

The effects of Ibutamoren MK-677

During different tests it was shown that Ibutamoren is an effective and safe compound for rapid weight gain. Among its other effects one should mention: strengthening of bones (mineralization), high production of growth hormone, quick restoration of muscles after training. Besides, this substance induces lipolysis, so it can be used against obesity. And which is most important, there are no side-effects when it is taken in recommended dosages.

The usual effective dosage is 10 -30 mg a day. In most cases 20 mg is enough to get excellent results. The substance has a long half life, so its effect can last for at least eight hours. The only shortcoming of ibutamoren is that it quickly suppresses insulin, ghrelin and somatotropin receptors, which leads to resistance and insensitivity of the organism to this substance.

To avoid this undesirable effect you should follow a special scheme. Take Ibutamoren for five days, and then make a break for two days. The total duration of the course is two months. Divide the daily dosage (2-4 tabs) into two parts, which should be taken in the morning and before going to bed.

Ibutamoren MK-677 became very popular among athletes due to its high efficiency, absence of side effects and convenience of usage. Besides its price is more attractive, comparing to similar products available on the market. All in all, one can say that Ibutamoren is the only alternative to growth hormone injections.

Be the first to review “MK 677 (Ibutamoren)” Cancel reply